Why is it I only think to go to Chic-fil-A on Sundays? So after settling for Popeye's instead who in their right mind ever orders regular chicken instead of spicy? Keeping with the theme here, why did The Zac Brown Band get nominated for best new artist this year if I have been listening to their music since 2003? 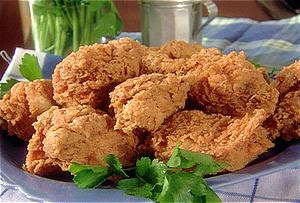 Special thanks to Brent B. for sending in this picture of Johnny Depp. I don't think Johnny has ever met a camera he didn't like. 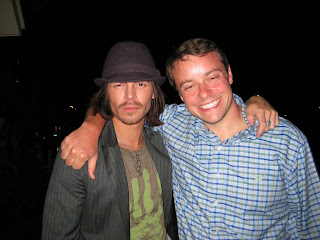 Clemson held their annual Spring Football game this weekend. Freshman Kyle Parker led his team to victory and most likely earned the starting QB job when football season rolls around. After completing 13-of-21 passes for 171 yards and 2 TD's he mosied on over to the baseball field where he went 3-for-7 with two home runs and 5 RBIs in a double header against #5 Miami.

My only question is did he go for the "Trifecta" by hitting up Tiger Town Tavern later that night and taking home two Tiger Coeds? Go ahead and give him the Heisman if he drove them through Easley, SC and stopped for a beer along the way.

I bet at least one person gets some form of fried chicken today just because of the picture here...

(Now for your annoying reminder to click the ads on the right side of the page. Hell click them a few times just for kicks. God only knows what the ads will be for today.)

Never fails that I end up craving CFA on Sundays.

What is this now? 4 days in a row of blogging? I'll keep clicking if you'll keep up the blogging!

No truer words have ever been spoken. The very idea that someone would skip out on the spicy chicken is insanity.

Also big ups to Popeye's for having red beans and rice as a side.

Guess the "Willy Korn Incident" just never lived up to the billing?

I craved Chik-Fil-A for lunch today but of course when i pulled in there was a guy in the drive thru line saying the power was out and they had no hot food.

Big ups to Atlanta apparently being Seattle the past few weeks.

O my gosh! Why are all the ads for checking folks' criminal record? LOL Hmmmm...

Katie - I think they put up extra Chic-fil-A stores on Sundays just to mess with me. I hardly ever want it during the week.

Harry - I had that exact meal last night. For an instant heart attack you can take the fired skin and put a little bit of beans in there.

BWL - Korn may be the 3rd string QB by the time Clemson plays Tech. He may also start every game the rest of his career...

Ashley - Were you clicking when you fell down the stairs? My site isn't big enough to handle a law suit yet.

Melissa - Most of the ads are for criminal records because we are from Madison.

You should blog about why King Sized Snickers are now in two pieces. Seriously, that doesn't make them King Sized any more...two fat midget sized maybe...