Some of you sent in some more Scoops pictures and I found a few more in the last week. Before I get to them I need pictures of fanny packs, chain wallets, mullets and just anything crazy you see. 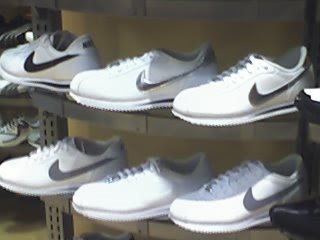 Scoop de jour - Phil Knight from Nike must keep up with my
blog and wants to capitalize on the phenomenon. If you were to
buy all these scoops you are set for the week. It even looks like
a pair of black scoops in there for Sunday. I actually know somebody
that has a pair of these. 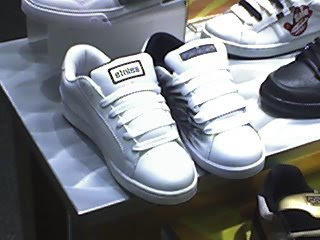 Fat Boys - I guess these are back in style. I really question why they
ever went out of style to begin with. These shoes are good for people
with kankles who want to take the focus off them on on to the scoop.
Also very popular among 80's rap groups. 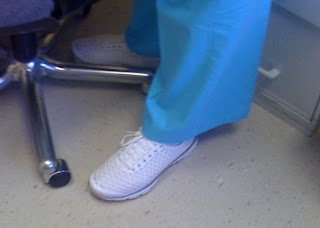 Medical Scoops - You can't really see it but these scoops are
made of mesh. I don't know if there was an fishing net laying
around and somebody thought it would make a nice pair of shoes or what.
Either way thanks for getting these Danyelle. This nurse could have
sliced you with a scalpel if she knew you were coveting her scoops.

Tourist Scoops - Tracey found these while standing in line
at the home of George Washington at Mount Vernon.
While Washington probably didn't wear a white scoop
he did wear the buckle scoop with massive ups. The
second gentleman in this picture is honoring the past with his ups.

Lost Scoops - This man is so lost he can't even
see the road he is standing on. Lucky for him
if he calls 911 they can send a rescue plane that will
spot his scoops from a mile away. I'm pretty sure
this man's wife bought and dressed him for his big
trip out of town and now he is lost somewhere in Smyrna.

Dude, these are hilarious!

I didn't realize scoops can also be black?

I think I need some more clarification on what a scoop actually is. Are running shoes considered scoops?

Maybe you can post some examples "scoops vs. not-scoops".

I love the link to the buckle scoop. That was a nice touch.

I’m going to have to agree with Katie on this one. I need more details on scoop vs. not a scoop. I thought I knew but now I’m confused. Please advise!

I will have an update up about scoops and nonscoops.

women being confused as usual...

I'm concerned that my husband could be sent in....he's guilty of wearing his nikes with his shorts and jeans.... does this mean I think Scoops are hot because I quite like his "sporty" look.

Can straight men wear scoops or are they reserved for omo's?